For small spaces, a standard projector may not fit your viewing needs. It is especially true for home theatres. In this case, you may need to opt for a short throw projector.

Short throw projectors only need to be a few feet away from the wall. Hence, you don’t have to find a wall mount. You won’t also have to free up space in the back of the room. Moreover, it does not require complex installation.

In the next sections, we’ll talk about the best short throw projectors for home theatres. Thus, if you like the offers above, then this article is for you.

What Should You Consider in a Short Throw Projector?

Before we start with the brands, we will first talk about the factors that you should consider in a short throw projector.

A projector’s resolution will affect the display’s clarity. You shouldn’t settle for something less than 480p.

Brightness tells how vibrant the display is. It’s one of the most crucial factors in a projector. You can know this through the device’s lumens.

If you want something that you can still use even in a bright room, then you should find a brand with at least 2,500. Because home theatres are usually dark, though, it can already use 1,500 lumens.

Input lies in personal preference. Find a connector that suits your needs. Usually, you can choose between HDMI, USB Type-A, and likes.

Of course, you should also consider the price. However, when we talk about specs, focus on the ones above. 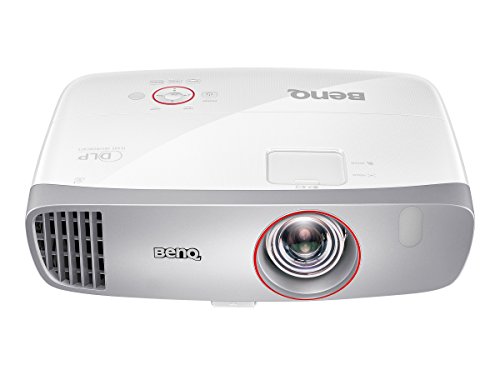 The first short throw projector on our list is BenQ HT2150ST. This model is initially for gaming needs. It, however, is also one of the best choices for home theatres.

In particular, those on a budget will favour the HT2150ST.

Here are the features that you should know about the model:

Despite being budget-friendly, you can see that this brand already has a lot to offer. Its resolution and brightness assure a high-quality display.

Not to mention, its 300-inch display will give a full cinematic experience. Its contrast ratio is also worth noting.

The HT2150ST is originally a ceiling mount type. Still, you can just place it on a table. There won’t be a problem with doing so. One con, though, is its limited input.

You can only connect it through HDMI. Thus, it won’t suit those who aren’t big fans of cables.

This model will fit if you want an affordable yet high-quality device. However, you may just need to take a look at your space because of the required HDMI cable.

The Optoma GT5600 is an ultra short-throw projector. Its design is for showing both games and movies.

This model is not highly expensive. It is, however, a tad higher than the former. If you can invest in a projector, this model’s specs are worth looking into.

Considering the model’s offer, it will surely give you your money’s worth. Its brightness level will allow you to watch movies even when the lights are on.

The contrast ratio is also remarkably higher than the HT2150ST. Another one of its best assets is the 3D display.

The 100-inch display size may initially seem small. It, however, will already be a good quality for small home theatres. It also has multiple input types, which is a great plus.

Though the device allows screen mirroring, you need to buy a separate wireless casting stick for it. So take note of it if you end up buying the model.

The GT5600 will give you the best value for your money. It’s worth investing in if you want a long-lasting and “almost” high-end device.

Another ultra short throw projector on our list is Ricoh PJ WX4130. This model is ideal if you prioritize having several input options.

It is in the same price range as the Optoma GT5600. Hence, customers often compare the two.

Here is an overview of the specs of the model at hand:

Specs-wise, this model is on the average side. Even so, it stands as a good choice if you value multiple inputs. It guarantees flexible viewing no matter the device.

The features may come off low, but they are just right for home theatre needs. Meaning, you won’t really miss out on anything.

The PJ WX4130 will not suit the needs of buyers who want ultra high features. However, it will be a good fit for those looking for a basic yet effective short throw projector.

Epson EpiqVision Ultra LS300 is more of a high-end short throw projector. As this model came from a reputable brand, you can expect top quality.

A lot of experts have also dubbed the LS300 as one of the best ultra short throw projectors.

For reference, below are the features offered by the model:

One of the most notable specs of the LS300 is its contrast ratio. It’s way ahead of other brands. With it, you can expect a vibrant display no matter the movie.

In addition, it uses Chromecast instead of cabled inputs. The model is a must for those who plan on using smartphones often.

What makes the model even better is the built-in Android TV. As long as you have an internet connection, it will let you stream exclusive channels on the go.

Note that this device can be more expensive than the other ones on this list. It’s worth it if you take its offers into account, though. If you’re in for an innovation-focused projector, then you should definitely cop the LS300. 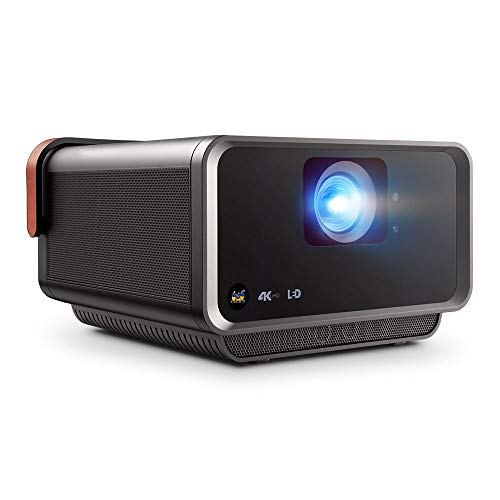 Lastly, we have the ViewSonic X10-4KE. This model is a short throw projector that became famous for its resolution.

Here are the specs:

The main asset of the X10-4KE lies in its resolution. This unit is one of very few budget-friendly 4K short throws.

It also has a large display side, as well as a notable contrast ratio. Moreover, the Aptoide IU will let you download streaming sites.

Once done, you can directly watch from there. It assures convenient watching. This model is the best choice if you want a 4K projector that won’t rob you of your money.

To make the most of your home theater experience, it’s important to have a projector with some key features. Here are some points that you should think about.

Things to Consider in a Short Throw Projector – Buying Guide

HDR is a great addition to any high-end projector because it offers more color and contrast, which are two things consumers want from their home theater experience. In fact, most lower-priced projectors don’t have enough brightness or wide viewing angles for HDR benefits.

If you want to use a projector for your home theater, make sure that you have an HDMI cable connection. You might need a different kind of cable connection if you want to connect from a laptop or a monitor. Projectors can also connect to things like TVs or game consoles. You can get one with WiFi or Ethernet so you don’t need extra cords. So it’s best to know what you need and compare this accordingly with the hardware that you have.

Many projectors have speakers built-in. But for the best sound, you will want to get a separate audio solution. Consider having an external surround sound system or a soundbar for better audio when using your projector as part of your home theatre.

Projectors can get really bright, but they also need to be able to handle a lot of ambient light in order for them not to look washed out. 3000 ANSI lumens is typically enough brightness for lights-on viewing whereas 2000 ANSI lumens will still look watchable but will look washed out by ambient lighting. It’s best to use projectors in a dark environment for a better viewing experience.

A short-throw projector has a resolution between 0.38:1 and 1.4:1. An ultra-short throw often has a throw ratio around 0.37:1 or less. If you need your projector close to the screen, then you should look for one with a lower throw ratio.

Projectors still use metal halide or mercury vapor lamps but more and more are using LED or laser lights. These lights can give extra brightness and color depth.

They also last longer than regular lamps, but you cannot replace them once they burn out. Replacing a regular lamp can cost a bit of money depending on the projector.

However, replacing just one bulb will be cheaper than replacing an entire projector.

If you want to play video games, the number of frames per second is important. Refresh rate is also important. It can be measured in hertz. Also, look for a projector with low input lag in addition to a high refresh rate or frame rate.

Projectors can cost a lot of money if you don’t do it right. You might spend as much or more on a projector as on a TV.

Different projectors have good and bad qualities, but before you buy one, make sure that you have a budget and stick to it. Projectors at the low-end of the price spectrum have some great features too.

Focus on a screen can make images clearer. Lower-budget projectors often use manual focus, but some modes also have auto-focus too.

Lens shift makes it so you can move a projector’s lens diagonally, vertically, or horizontally without moving the whole unit.

Is a short-throw projector better?

Short-throw projectors have many advantages over other projectors. One of the best benefits is that it can cast a large, 100-inch image in a tight space.

If you want to install a projector in your living room or bedroom but don’t have much space, a short-throw projector could be good for you. Short-throw projectors work well since they can be set up anywhere. You might want to put it on a coffee table or even in front of the person watching.

How do I choose a short-throw projector?

To know what size projector will work best, you need to know the size of your screen. You can check this out before you buy your projector. If you don’t know these things, then pick a projector with more zoom or one that has a shorter throw.

Decide how far a throw you want the projector to have. Will it be a short throw of 3-8 feet? Or will you want the ultra-short-throw of 0-3 feet?

You will also need to look for the screen size. Short-throw projectors require specific screens for optimum functionality. You will need to know how many inches your projector needs in order to maintain a clear picture.

How far can a short-throw projector work?

Short-throw projection is when the distance between the projector and the screen is less than 8 feet.

Why are short-throw projectors so expensive?

Do short throw projectors have zoom?

If you’re working with a smaller space, then short throw projectors will best suit your needs. Unlike a regular one, this device works even if it’s just inches away from your wall.

What makes it better is its high-quality display.

To land on the best brand, you need to take a lot of factors into account. To be specific, these are resolution, brightness, and input.

Considering what the device can offer, expect that it can get pricey. Even so, it’s guaranteed to be a good lifelong investment.