Torches and especially LED Torches are gadgets that we use in our lives for most of us at least on a weekly basis, and for the rest of us on a daily basis, sometimes even for work.

They need to be conveniently placed either at work or at home, or even in your vehicle so that we can see in the dark in places where it would otherwise be impossible without a torch.

Size is also important depending on where you need to keep the torch, like if it needs to be with you on the body for work or recreational purposes like camping.

Needless to say that LED Torches allow you to see clearer and brighter than ordinary torches and obviously LED torches will use less energy and last longer than other torches with standard bulbs etc.

And, let me tell you when you don’t have a torch, whether it be a LED torch or other, and you find yourself in a tricky situation in the dark, you realize just how important they really are.

So it’s extra important that you have a quality torch in certain areas of your life.

This article is written in order to help you in deciding the best LED torch under $50, which I think is the most you should have to pay for a reliable, long-lasting, quality torch.

To do that, first, I have talked about the main features you will need to look for in a decent LED torch.

Then, I have written reviews of the best selling LED Torches under $50 US, in these reviews I have provided some pros and cons about each individual product.

Hopefully, after you have read through this page, you will have a clearer understanding about the differences between a good torch and a bad one that is overpriced, then it will be up to you to choose your favorite LED torch to buy without any hassle at all.

Finding the Best LED Torch for Under $50

When searching for the best LED torches, especially for any torch over the $30 price mark, you need to take into account a few factors that will give you a good indication which product is going to be most preferable to you.

First of all, Why LED Torches?

LED stands for “Light Emitting Diodes“, and compared to Torches with Incandescent bulbs, Torches with LED bulbs are a far more superior product because LED torches contain the durable and long-life LED light-bulbs.

Some major advantages to LEDs are that they are rated for between 50000 hours to 100000 hours of life, which is between 5 and 10 years of continuous use.

LEDs will use far less power than inferior products with incandescent bulbs and give off a brighter light. So this means longer battery life, and less money spent in the future.

Also, since there is no filament in LED bulbs (which is the thin wire inside the incandescent light bulbs, when broken the bulb is “blown” and no longer works), it makes the LED torches tougher and more shock resistant than those with other bulbs.

Although your LED bulb may last what seems forever, you need to take into account the battery life of your torch.

Good batteries in combination with a quality torch and a LED bulb and you should have light when you need it for a very long time before the light starts to fade.

When buying any flashlight you look for a Lumens rating which shows the total amount of light that the torch will throw out from the front.

150 Lumens is probably the brightest that anyone will ever need in the darkest situation. Around 70 Lumens is a great medium brightness for most situations.

Impact Resistance is measured in meters and indicates the height that the flashlight could be dropped onto concrete and would still work properly.

The torch may also not have any cracks or breaks in it. LED torches will be tougher than other flashlights.

A good torch will be water resistant and this will also depend on the quality and usually the price of the flashlight.

Take time to look at any details that mention “water resistant” statistics, this spec may save you in a wet situation.

Waterproofing can be a very important quality.

The size of a Flashlight is totally up to you.

You will know what size torch you will need by considering what you will be using your new LED torch for.

Consider where you will be carrying your new LED torch.

You should not have to spend over $50.

I will give some really awesome examples of some quality LED torches under $50 in this post.

Just remember, this thing could help save a life, so don’t buy the first piece of rubbish you see.

Of course, there will be different torches for different situations, so you can use cheaper torches for places, that all you need is some light for a bit of convenience.

Personally, I keep one quality LED torch in my vehicle, one small one on my keys, a medium priced flashlight next to my bed, a quality LED flashlight in my kitchen and also in my garage and tool shed.

Keep some spare batteries and bulbs in a couple of places around the home as well. I’m still considering buying a few more.

This Tactical LED torch is a quality flashlight and is well under $50!

It’s constructed from aircraft-grade aluminum with a hardened anodized finish.

It’s tough, sturdy, and dependable, and this is exactly what we are looking for in a flashlight.

This is the torch you want to have next to your bed, and in your car, for emergencies and all situations in the dark.

A really big selling point for me is it comes with a Lifetime Manufacturer Warranty, so if I were to have any problems with this product, I would take advantage of the warranty.

As you will see with this product, you really don’t have to pay any more than $50 for a quality LED torch.

It’s Shockproof, plus water-resistant, submersible up to 3 feet of water.

It has a bright light beam that lasts for ages and it has even been used by military and law enforcement.

This LED flashlight is one of my favorites and it ticks all of the important boxes. With multiple light output modes, this Tactical LED Flashlight the T7 Tactical Torch is great to keep in any location, on standby for when you may need a good source of light and a strong and trustworthy torch.

This medium-sized handheld torch, measuring 136mm in length and a diameter of 37mm, and it’s constructed from high-tech aircraft-grade aluminum so it weighs just 198 grams.

It has a high-performance CREE Power LED Light Chip, and its shape and grip have been adjusted to meet the requirements of tactical units.

It’s powered by 4 x AAA alkaline batteries which are included, and this tough LED torch shines brightly at 200 Lumens, but the T7 is also equipped with a Dynamic Switch on its end cap that offers three different levels of brightness which are 175 Lumens (Power), 135 Lumens (Low Power), and 30 Lumens (Boost), on three different settings, with a very high burn time of up to 55 hours, and an equally impressive beam distance of 210 meters, so it should come in handy in any situation.

The T7 features an Advanced LED Focus System, that combines both a precision lens and a dynamic reflector.

This unique optical system will help deliver a wide homogeneous flood beam for close-up visibility, together with a sharply focused spot beam for long distance visibility.

The torch even has a “Speed Focus” function, which allows single-handed focusing to change from flood to spot beam, in a second.

The combination of technology, performance, and size, makes the T7 Tactical LED Flashlight a powerful all-rounder.

And again, this LED Torch is well under $50. This torch is meant to be a high quality LED torch that is designed tough but lightweight, with 6061T aluminum and has T6 LED chip, which is very bright for a flashlight.

But, with the IWISHLIGHTTM XM-L T6‘s adjustable focus5 modes you can control how bright you want your new torch to shine, a very handy option when it comes to using a flashlight capable of shining over 2000 lumens.

You have the option to use 18650 batteries or AAA batteries, a plastic tube for use of the 18650 battery and also an AAA battery holder is included when purchasing the IWISHLIGHTTM.

The 18650 are a 3.7 Volt, Li-on battery with a 2400Ah capacity which is safe and environmentally friendly and this is a bonus for people like me (someone with kids and cares about the future of our world).

BUT, after doing some research, what I’ve written above is the only good I could find because there just hasn’t been enough customers on Amazon.com yet, so there’s only one review and it’s not a good one.

It may just be a competitor running the product down, or they might have got a faulty torch, or it may just be that the torch has been talked up way too much by its owners.

The only comment that has been made is negative toward the 2000 lumens, so it may still be a great torch for under $50.

At least this is another option for you to compare other torches with. My opinion on this item would be to keep an eye on it, for more feedback and maybe even a price drop in the future. 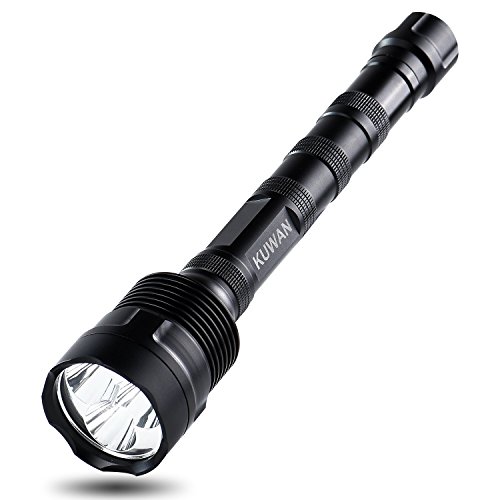